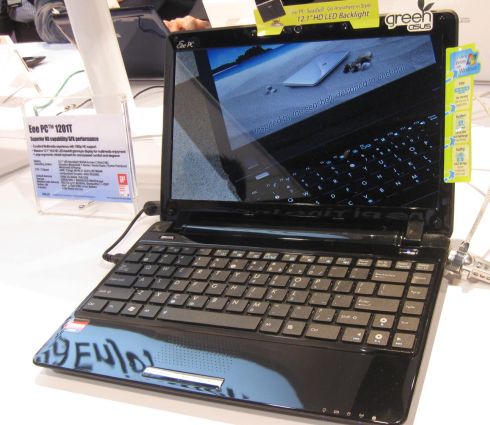 But here’s one I hadn’t seen before: The Asus Eee PC 1201NL. What sets this model apart is the fact that it comes with the Asus ExpressGate quick boot environment and driver support for Windows XP or Linux. But it doesn’t ship with a full desktop operating system at all.

Update: I’ve just been contacted by Asus PR, and it looks like the Eee PC 1201NL will not be shipping sans OS. Instead, it will come with Windows 7 Starter Edition if it’s released in North America. The only difference between this model and the Eee PC 1201N is that the 1201NL will have a single core Atom N270 CPU rather than the dual core Atom 330. The reason for the confusion seems to have been a sign next to the notebook (see the gallery below) that said the OS would be Windows XP or Linux. When I asked an Asus rep about that this afternoon, he said drivers would be available for both but that it would ship without any OS. Apparently that was a mistake.

The Eee PC 1201NL also has a single core Intel Atom N270 CPU and NVIDIA ION graphics. According to an Asus rep, it will sell for about $20 to $30 less than the Eee PC 1201N, which has a dual core Atom CPU and ships with Windows 7. No word on the launch date.

All four versions of the Eee PC 1201N look pretty much the same on the outside. They all have 12.1 inch, 1366 x 768 pixel screens, chiclet-style keyboards, and shiny black cases. You can find some more photos after the break.