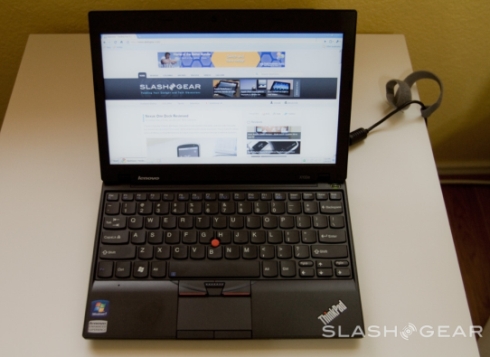 The Lenovo ThinkPad X100e stands apart from other notebooks in the thin and light crowd in a couple of ways. First, it has an AMD Neo MV-40 processor and ATI Radeon 3200 HD graphics, which you don’t find in a lot of 11.6 inch laptops. Second, it has a distinctive keyboard design. Third, it’s got Lenovo’s signature TrackPoint system which lets you use either the touchpad or a pointing stick in the middle of the keyboard to move the cursor.

But there’s another thing that apparently sets the ThinkPad X100e apart from other thin and lights such as the Asus UL20A, Acer Aspire 1810, and even the Lenovo IdeaPad U150. The X100e gets horrible battery life.

A few weeks ago Peter at Netbooked reviewde the laptop an found that even with a six cell battery, he was only getting 3 to 4 hours of run time. Now SlashGear’s Ewdison Then has posted another review, and he says the laptop typically ran for just about 3 hours on a charge.

Lenovo admits that the the X100e isn’t designed to get the 10+ hours of battery life we’ve come to expect of netbooks and ultraportables with Intel Atom or CULV processors. The company says with a 3 cell battery the X100e should run for about 2 hours, and it should be good for up to 5 hours with a 6 cell battery. But it sounds like the laptop is having a hard time coming anywhere close to that 5 hour promise. Perhaps you need to turn off the WiFi, dim the screen, and let the CPU idle…

Of course, some users would probably be willing to put up with crappy battery life if it came with a significant performance boost. But SlashGear says the laptop doesn’t feel any faster than a machine with an Intel Atom CPU. But as Netbooked points out, the ATI Radeon 3200 graphics does at least give the machine a bit of an advantage in some tasks. For instance, it can handle 1080p HD video playback, something that no Atom-powered system can do without help from NVIDIA ION graphics or a Broadcom HD video accelerator.