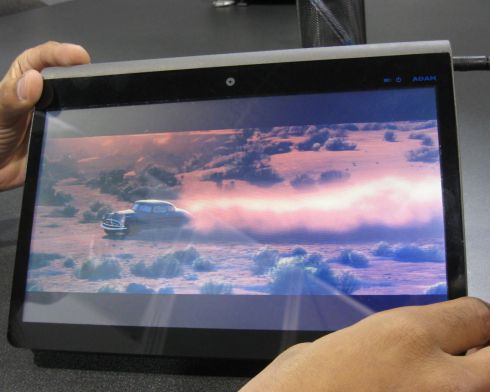 This year’s CES has been dominated by 3D TV, eBook readers, and a plethora of tablets. But the Notion Ink Adam tablet manages to stand out from the tablet crowd by sporting some of the hottest new technology. And I really do mean hot, and not just hyped.

First, it’s one of the first devices to use Pixel Qi’s 3qi LCD display which features a higher contrast ePaper mode that uses just 0.5 watts and a full color mode that uses the same 2.5 watts as a standard LCD screen.

Second, the Notion Ink tablet is powered by NVIDIA’s Tegra 2 chipset. Tegra 2 is based on a low power ARM processor and high performance NVIDIA graphics that allow tablets like the Adam to handle 1080p HD video playback without breaking a sweat. The chipset can also handle games that would make an iPhone cry, while still providing excellent battery life. 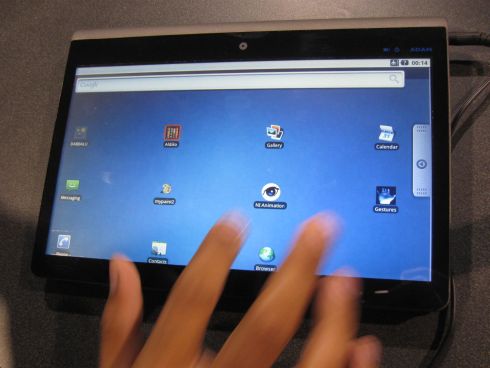 The Notion Ink Adam is also running Google Android for its operating system. Android seems to be everywhere this year. And while the OS was designed for smartphones rather than tablets, the UI scales quite nicely to the Adam’s 10 inch display. On the down side, Google hasn’t opened up the Android Marketplace to this type of device yet, which means that third party applications will have to come from the as-yet-unlaunched Notion Ink app store.

Notion Ink is showing off a prototype at CES this week. The demo tablet actually features a handmade wooden case. But it looks quite slick nonetheless, and Notion Ink says the final case will be even thinner at just about 14mm thick.

During a brief demo today, Notion Ink Director Rohan Shravan showed me how the prototype handles HD video, games, eBook reading, and pictures. The verdict? Video playback was flawless in both color and black & white modes. Pictures looked great in full color, although the colors weren’t quite as vivid as I’ve come to expect from a netbook or tablet LCD. Still, the fact that you can switch off the backlight and use the tablet in direct sunlight more than makes up for that. And the eBook experience was comparable to what you would expect from a dedicated eBook reader with an e-Ink display — except without the slow page refresh times. On the down side, the demo unit has a glossy screen which attracts fingerprints and reflects glare. Shravan says the team plans to replace it with a matte finish. 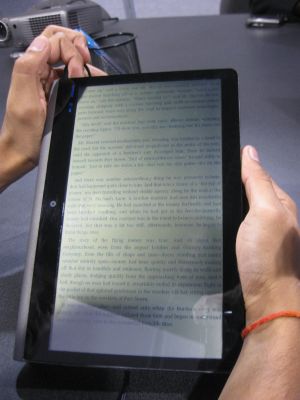 While the tablet isn’t ready to come to market just yet, it’s the first device I’ve actually seen that’s designed to use the Pixel Qi display (up until now, I’ve only seen the 3qi retrofitted into existing devices). Notion Ink is looking to partner with telecoms to bundle the tablet with 3G access before bringing it to market, so it’s too early to talk about pricing. 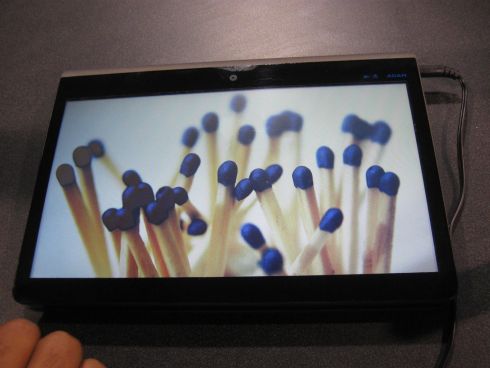 Still, dedicated eBook readers are selling for $200 and up, with many selling in the $300 range. As long as the Notion Ink tablet can come in at $600 or less, it’s going to be hard to convince people that they should buy a device that’s only good for reading eBooks when they can pick up a tablet like the Adam which can surf the web, play HD video, and run games and other Android apps. 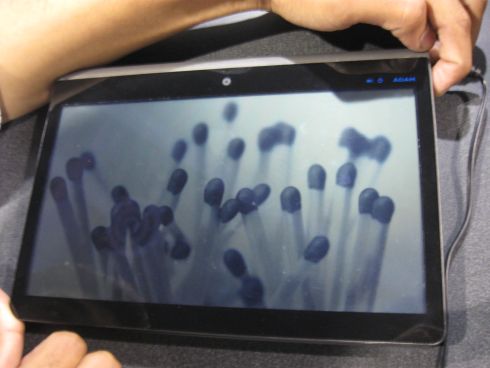 On the other hands, eBook readers typically weigh less (although the tablet is pretty light at around 1.5 pounds) and can run for weeks at a time without charging. Nobody could give me a good estimate of the Notion Ink Adam’s battery life, but an NVIDIA rep says that a 5 inch tablet with the Tegra 2 chipset can handle about 15 hours of video or 140 hours of audio on a charge. The Notion Ink has a larger display, so you should probably cut those numbers a bit. But in eBook mode, the tablet might just be able to give a dedicated eBook reader like the Kindle or Nook a run for its money in the battery life department.

In order to show off the graphics capabilities, Notion Ink designed a game that looks rather simple, but which requires some pretty advanced capabilities. Basically, you can poke at the screen as many times as you like to create new colorful balls which will drop and bounce throughout the screen. Each reacts differently depending on the angles, etc.

I also shot a short video showing the tablet function as an eBook reader. As you can see, there’s no waiting for the page to refresh as there is in an e-Ink device. You just flip from one page to the next.

The reason the screen goes black briefly in the video is because the software is busy loading the next chapter of the book. But basically, the display works exactly the same in color and black and white modes. It just uses less power and can be read in direct sunlight. While the Notion Ink tablet nominally has a 1024 x 600 pixel display, the 3qi screen can actually display 3072 x 600 rectangular pixels in order to make text look better in landscape mode. The company is working on upping the resolution both vertically and horizontally so that tablet-style devices like the Adam will be able to display high quality text in portrait mode as well.