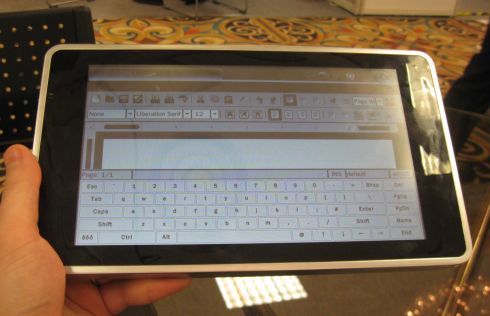 While CES is choc full of companies showing off tablets using ARM-based chipsets from Qualcomm, Freescale, Marvell, and NVIDIA, the folks at Texet are taking a different approach. The Texet EZB890 is an 8.9 inch touchscreen tablet with a 500MHz MIPS-based processor. It’s running a custom Linux distribution, and it’s surprisingly snappy.

The tablet comes with a number of open source applications including the Firefox web browser, AbiWord for word processing, and Gnumeric for editing spreadsheets. It also has a media player which can handle XViD, MPEG, and a handful of other formats, although H.264 isn’t currently supported.

I asked if users would be able to install their own Linux applications such as OpenOffice.org or VLC and the short answer is no, not at the moment. But if the platform takes off, we could see an app store that would allow users to install applications that are known to work well on the hardware.

The tablet has a 1024 x 600 pixel 8.9 inch display, 1 to 4GB of flash storage plus an SD card slot, 2 USB ports, and a 3 hour battery. A more powerful battery is an option, but Texet says they went with a low capacity battery to keep the cost down. There’s also 802.11b/g WiFi. There’s also room for a 3G modem and SIM card slot, and ultimately Texet is hoping to partner with mobile operators to bundle the tablet with 3G service and sell it, possibly with a custom user interface. Without a subsidy, the Texet tablet should run about $300. With one, Texet is hoping you might be able to get the tablet for free with a contract.

You can check out more photos, plus a brief hands-on video showing the tablet’s video player after the break.

5 replies on “Hands on with Texet’s 8.9 inch touchscreen tablet”