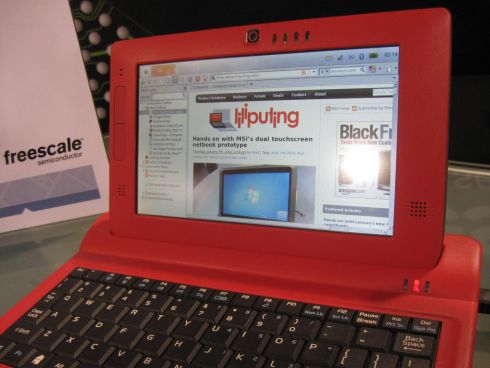 A few days ago Freescale introduced a reference design that could be used to produce a $200 web tablet with an optional keyboard dock. I got a chance to check out a prototype this afternoon and it’s a pretty intriguing little device. It’s fairly snappy when it comes to surfing the web, and the tablet can handle 720p HD video playback.

The Linux user interface looks a bit like Google Android thanks to the widgets that pop up on your desktop. But the Freescale tablet is designed to be used with a stylus, not a fingertip.

The 7 inch, 1024 x 600 pixel display is pretty sharp and the tablet is very light. But it’s hard to make a decent sized keyboard for a 7 inch device, and I found typing on the optional keyboard accessory to be a bit of a chore.

Freescale says the low power ARM-based processor helps the tablet run for up to 12 hours on a charge with a small 1900mAh battery. I didn’t have 12 hours to test the claim, but the demo unit wasn’t fully charged and actually ran out of juice just a few seconds after I lifted it from the keyboard/docking station.

This isn’t the most polished tablet, smartbook, or netbook I’ve seen so far this week. But if Freescale can find partners to actually bring this reference design to market for under $200, I think consumers will be willing to overlook some rough edges to get their hands on a device this cheap that’s capable of real web browsing.