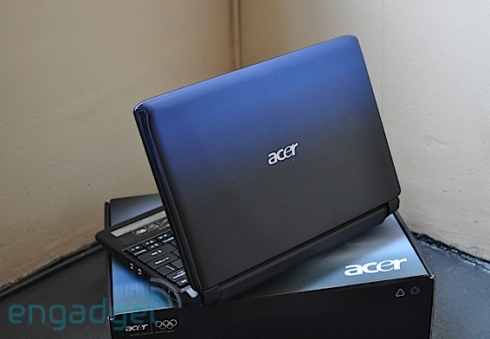 Like virtually every other PC maker around, Acer recently introduced a new netbook based on Intel’s Pine Trail platform. The one thing that sets the Acer Aspire One 532h apart from the crowd is its low price. it sells for just $299, yet still comes with a 6 cell battery and specs that are similar to those of netbooks that sell for $5o to $100 more.

Engadget’s Joanna Stern got a chance to check out an Aspire One 532h recently and she’s posted a detailed review. The netbook is reportedly one of the thinnest and lightest around, at just 2.4 pounds and less than an inch thick. The new chiclet-style keyboard is reportedly a little more cramped than the same keyboard on Acer’s 11.6 inch laptops.

As far as performance, the laptop performs about the same as other Pine Trail netbooks, which is to say it’s fast enough for web browsing, but you probably wouldn’t want to do a lot of video editing on it. Joanna got about 6.5 hours of battery life while watching video. Under real world conditions, you can probably tack another hour or two onto that time.

For more photos and details, hit up Engadget.