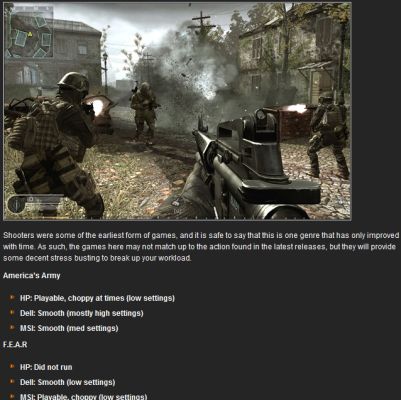 Netbooks are known for their, low screen resolutions, and relatively underpowered CPUs. I would argue that none of these things actually defines a netbook. Rather, small size and low price are the defining characteristics. If someone put a Core i7 chip in a 10 inch laptop and sold it for $400, I’d be perfectly happy to call it a netbook. That’s just not likely to happen anytime soon.

Anyway, given that netbooks generally do have slow processors, low screen resolutions, and integrated graphics, you might thing that they’re not much good for gaming. And if you only play bleeding edge games, you’re probably right. But it turns out that there are plenty of games that do play well on a typical netbook with an Atom N270 CPU and 1024 x 600 pixel 10 inch display. And I’m not just talking about Bejeweled and Tetris clones.

GamingBolt rounded up 100 popular games and tested them on an MSI Wind netbook as well as a 2-year old Dell laptop and a 9-year old HP desktop. The verdict? You’d be surprised at how many ran smoothly on the netbook. That includes first person shooters like Quake III, Max Payne 2, and Grand Theft Auto: Vice City, role playing games including Final Fantasy XI Online, Neverwinter Nights, and Elder Scrolls III: Morrowind; racing games including Need For SpeedUnderground 2 and NASCAR Racing 4; strategy games including Starcraft and Civilization III; and adventure games including Prince of Persia: Sands of Time and Rayman 2.

For the complete list, and more details about gameplay on each game, hit up GamingBolt.