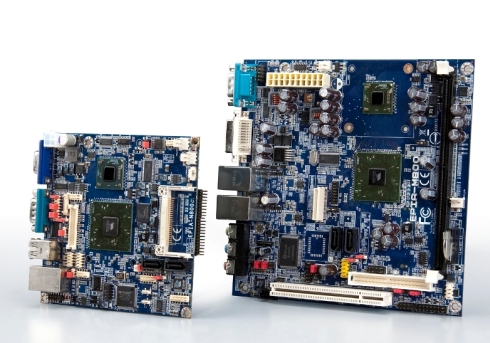 Chip maker VIA has a rather tiny share of the PC CPU market. So perhaps it’s appropriate the company is focusing heavily on CPUs for tiny PCs. And that doesn’t just mean netbooks. VIA is introducing two new desktop motherboards for small form-factor desktop computers, also called nettops. Both are designed to use VIA’s low power Nano processor, which competes with Intel’s Atom platform in the netbook and nettop spaces.

The new VIA EPIA-M800 Mini-ITX motherboard can use a 1.2GHz Nano U2500 CPU or a 1.3GHz U2250 processor. It supports DVI, HDMI, and dual gigabit Ethernet connections. It includes the VIA VX800 media processor.

The VIA Nano is a 64-bit processor, unlike Intel’s 32-bit Atom. The new mainboards and processors support Windows 7, and while they’re designed for use in embedded devices such as kiosks or digital signs, they should pack enough oomph for a low power home media PC. They should be able to handle 1080p HD video and DirectX 9 graphics, as well as 6-channel audio.

2 replies on “VIA introduces new mini-mainboards for Nano processors”