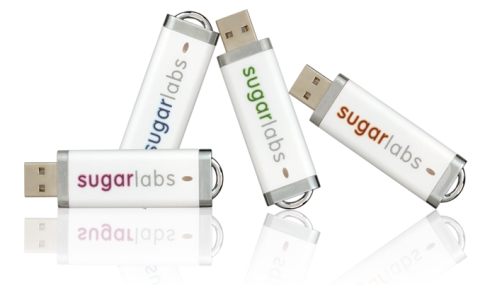 Sugar OS is the custom Linux user interface designed for the OLPC XO Laptop. Sugar on a Stick is a project that lets you run Sugar from a USB flash drive, no XO laptop required. I first checked out Sugar on a Stick earlier this year, when it was still a bit rough around the edges. But at the Netbook World Summit in Paris today, Sugar Labs CEO Walter Bender introduces Sugar on a Stick version 2.0.

The new version is code-named Blueberry (which is a step up from the previous Strawberry release). It’s built on Fedora 12 and includes a few new tricks such as support for Flash. There’s also a new version of Open Office 4 Kids, which is a stripped down version of OpenOffice.org.It also includes improved wireless networking, easier keyboard configuration, and updated versions of the applications that were available on earlier versions.

You’ll need a 1GB or larger flash drive to use Sugar on a Stick. You can download the 589MB image from the Sugar OS wiki, which also has installation instructions.

Johannes from NewGadgets.de captured some video of the Sugar on a Stick 2.0 launch at the Netbook World Summit. You can watch it after the break.