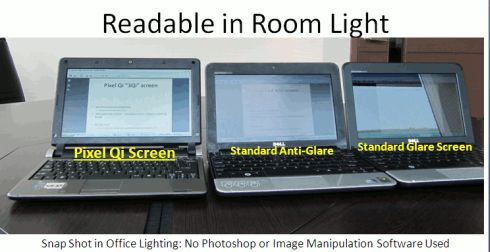 Over at the official Pixel Qi blog, Mary Lou Jepsen has announced that production is under way on the first batch of their much-heralded displays. Brad reported recently that we would see Pixel Qi kick things off mid-December, so it looks like they may actually be ever so slightly ahead of schedule.

According to Jepsen’s post, the first run will be used in “specialized tablet devices with multi-touch.” She also states that the displays in such devices will become thinner over time, though some customers have stated a preference for a more traditional thickness.

Hoping to get your hands on a Pixel Qi display of your own? Good news – Jepsen says that in Q1 2010 the company will be making a limited number available for DIYers. Details have not been announced, and she asks that individual requests are held until how-to information has been posted.

You’ll also be able to catch Pixel Qi at CES in January 2010 though Jepsen didn’t reveal who they will exhibit with. Not yet, anyway, so stay tuned!