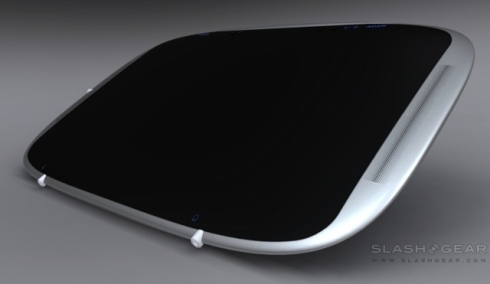 Pixel Qi is getting ready to show off its 3qi transflective displays at CES. Founder Mary Lou Jepsen says the first 10.1 inch, 1024 x 600 pixel screens are already in production, so all we’re waiting for now are the announcements from companies that will be launching devices using the screens. And first up, we have Notion Ink.

SlashGear got the skinny on an upcoming Notion Ink tablet that runs Google’s Android operating system. The machine will use the NVIDIA Tegra T20 chipset which means it will be able to play 1080p HD video while minimizing overall power consumption. And it will have a Pixel Qi display which operates in two modes: Fully saturated color mode and high contrast, grayscale ePaper mode. The ePaper mode allows the computer to save energy and to be easily readable outdoors.

In other words, thanks to the Pixel Qi display and ARM-based processor, you could essentially treat the unnamed Notion Ink tablet like an eBook reader some of the time, and a fully functional computer (without a physical keyboard or desktop operating system) the rest of the time. Notion Ink says the device will run for up to 8 hours of continuous HD video playback or 16 hours of web surfing over WiFi.

The tablet will support WiFi, Bluetooth, and 3G wireless connections as well as GPS. It measures 9.8″ x 6.3″ x 0.6″ and weighs 1.7 pounds. The tablet comes with 16GB or 32GB of onboard flash storage and it has USB, HDMI, mic, headphone, and SD card slots for expansion and peripherals. It also has a 3MP webcam.

Notion Ink is expected to show off the tablet at CES. There’s no word on a launch date or price yet.

You can find more photos at SlashGear.