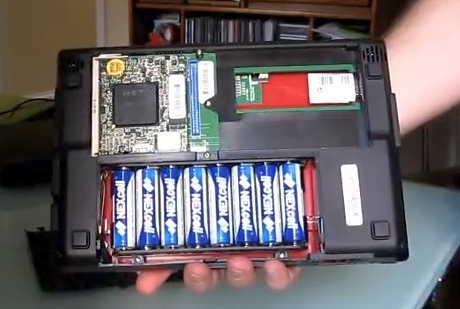 The folks at NorhTec just sent me an interesting netbook to play with. You can check out my unboxing and hands-on video after the break, as well as a peek beneath the hood. But first, here’s a bit of info about why the NorhTec Gecko Edubook isn’t like other netbooks.

I mean sure, it has an 8.9 inch 1024 x 600 pixel display and can run Windows or Linux. But that’s about it for the similarities. Here’s a brief list of things that makes the Edubook stand out from the crowd:

The Edubook is also fanless and can be used in high temperature environments without cooling.

The netbook is designed for educational purposes, although NorhTec says there’s been a lot of interest from open source enthusiasts and Linux hackers. The entire system is designed to be modular. You can even pop out the CPU and replace it easily, and the idea is that NorhTec can either sell you assembled units or a batch of barebones units that you can assemble on-site. For instance, you might be able to pick up some of the components such as SD cards cheaper in your own country.

The RAM is on the same module as the CPU. So you’ll be able to buy a new chip with an upgraded processor and/or more memory when they become available without replacing the entire computer.

There’s no power brick. Instead you plug the power cable directly into the back of the computer.

The notebook isn’t designed to be a speed demon and I don’t expect it to outperform similarly sized laptops in its class. Instead, it’s designed as a durable, customizable, and low cost machine for use in educational settings, developing nations, and other places where price is more important than the ability to play Call of Duty 4.

It’s a little thicker than I would expect from a typical 9 inch netbook, and the keyboard and touchpad are uncomfortably small for adult hands. But they’re designed for school children, not for me.

You can check out two hands-on videos with the Edubook after the break.