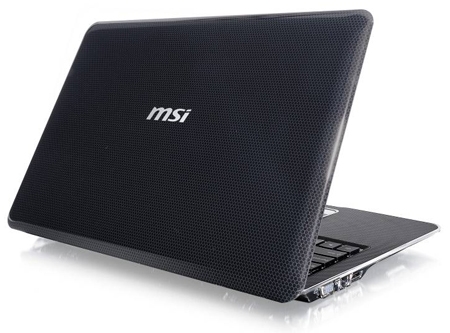 The MSI X-Slim series of notebooks are thin and light with low power, moderate performance processors. When MSI first introduced the X-Slim series at CES in early 2009, it was hard to resist comparing the sleek looking laptops to the MacBook Air. You know, if the MBA had a heck of a lot less processing power and a much, much lower price tag.

But it looks like MSI is giving these notebooks a performance boost. At launch, the first X-Slim models had Intel Atom processors. Then MSI started using single core Intel CULV processors such as the SU3500 Core 2 Solo CPU. And now MSI is launching the MSI X350, with a dual core Intel Consumer Ultra Low Processor.

The X350 is basically an updated version of the company’s X340 laptop with a 13.4 inch display. It measures less than 0.78 inches thick, and the new model will be available with either an Intel Pentium Dual Core SU4100 or Core 2 Duo SU7300 processor.

The MSI X-Slim X350 is still no MacBook Air. But it’s no netbook either.