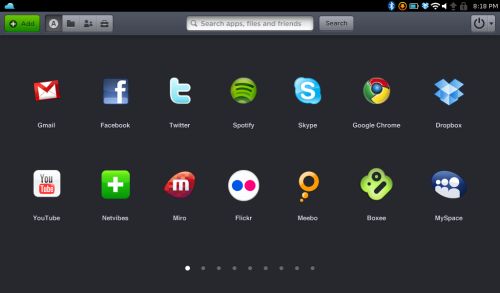 After months of private alpha testing, the folks at Jolicloud have launched a public beta version of the netbook operating system called Jolicloud Express. In other words, anyone can download and install it now. You don’t need an invitation.

Jolicloud is a light weight Linux distribution that’s designed primarily to run web applications such as Gmail, Google Docs, Facebook, and Twitter. But unlike Google’s upcoming Chrome OS, Jolicloud is more than just a glorified web browser. It can also run native Linux applications such as OpenOffice.org, Boxee, and GIMP, which makes it pretty useful when you’re on an airplane or another location where you may not have an internet connection.

Jolicloud Express also has a new HTML5 program launcher, which you can see in the image above.

You can download and install Jolicloud on a Windows netbook, creating a dual boot system that gives you a choice of operating systems at boot.