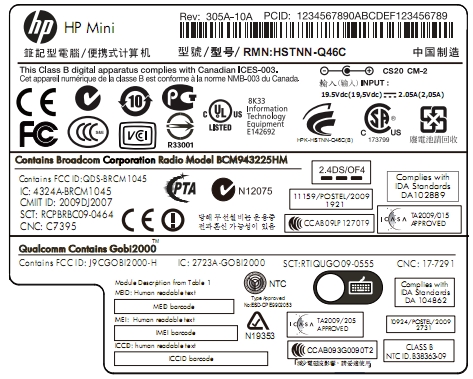 Every now and again the FCC will publish a document that will completely ruin the surprise launch of an upcoming product. And sometimes companies do a much better job of covering their tracks by requesting the FCC hide some of the good stuff behind a confidentiality agreement. It looks like HP is taking the latter approach with two new products that sort of, kind of showed up on the FCC web site recently.

Basically, the FCC has listed test reports for two cryptically named HP products. One is described as a tablet, while the other is a netbook. There are no model numbers that seem to correspond with HP’s usual naming conventions. And all pictures of the devices have been hidden away behind confidentiality agreements, leaving just a few arcane test reports and FCC labels for us to peruse.

Wireless Goodness figures the tablet is the upcoming HP TouchSmart TM2. But it’s not clear if the netbook is the upcoming HP Mini 210 we’ve been hearing so little about or something else. What we do know is that both computers will be available with Qualcomm’s Gobi2000 wireless chipset which supports GPS and worldwide 3G data connections. There’s no way to know whether this is a standard or optional feature.