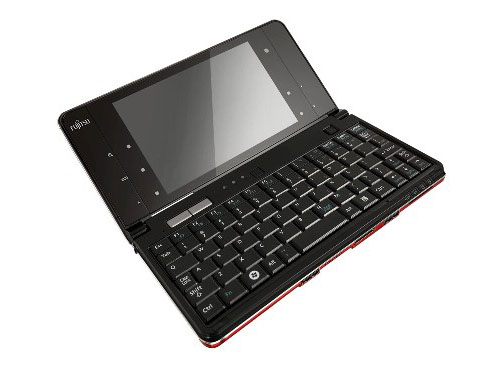 I love Fujitsu’s build quality. They make good, sturdy notebooks and netbooks and they’re not afraid to try things other OEMs aren’t trying. Like the UH900, which looks like a competitor to the Sony Vaio P series.

Unlike the Vaio P — which sports a “massive” 8″ display — the Fujistsu ships with a smaller 5.6″ panel. It’s also only 8 inches wide and weighs a scant 500g (just over one pound). Personally, I have enough trouble typing on the 8″ Aspire One and Eee PC models. I think I’d rather thumb-type on my iPod Touch than keyboard on the UH900.

Here’s what we think the specs are: The UH900 runs an Intel Atom Z530, 2GB of DDR2 memory, and  62GB SSD. It’s also got Bluetooth, a webcam, 3G support, and will ship with Windows 7. Its most compelling feature, though, is the multitouch display – which sort of makes the UH90 a big, tricked-out iPhone with a keyboard.

While I’m pretty sure I’d rather punch myself in the face than stare at Windows 7 on a screen this size, Moblin and Android might actually look pretty nice on it – or perhaps even Chrome OS?

11 replies on “Fujitsu unveils UH900, wants you to go blind and get carpal tunnel”