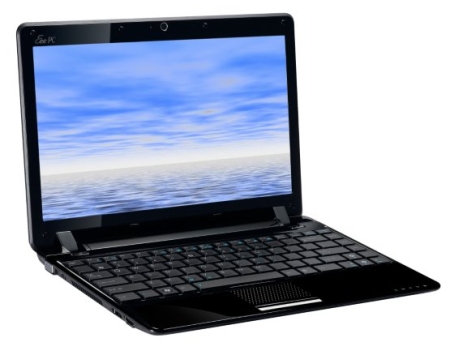 The Asus Eee PC 1201N notebook with NVIDIA ION graphics and a dual core Intel Atom 330 CPU is now shipping in limited qualities from Newegg. You can pick one up for about $499.

The laptop has a 12.1 inch, 1366 x 768 pixel display, 2GB of RAM, a 250GB hard drive, and runs Windows 7 Home Premium. You also get 500GB of free online storage when you purchase this notebook (or a number of other new models from Asus). The 1.6GHz dual core Atom 330 processor is more commonly found in nettops, making this one of the few notebooks to use the dual core Atom CPU.

You may not notice a huge performance boost from the CPU in most tasks, but it should help a bit with multitasking and when running tasks that can take advantage of both processors. For instance, when I used MediCoder to transcode a video using machines with dual core and single core Atom processors, the dual core model completed the task in almost half the time.

And of course the NVIDIA ION graphics should give you a boost for watching HD video or playing some modern video games. At $499, the Asus Eee PC 1201N isn’t the cheapest NVIDIA ION-powered notebook on the market. That award goes to the HP Mini 311. But if you’re a sucker for a dual core CPU and a slightly larger display, the Asus Eee PC 1201N might be the way to go.

Newegg is only accepting one order per customer at the moment, which would seem to imply that there aren’t a heck of a lot of units to go around.