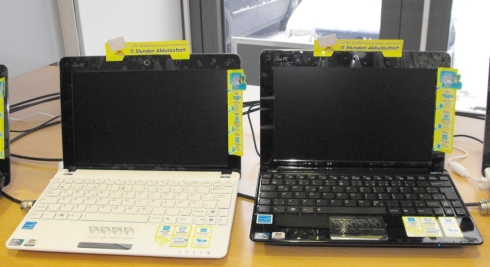 You know that Asus Eee PC 1005P I told you about yesterday? The one with a shiny new Intel Atom N450 Pineview processor? You know, the CPU that Intel’s not launching until CES in January? Yeah, that one. Well, it turns out you can already buy see it in person in Germany. And that’s exactly what Johannes at NewGadgets.de did.

Johannes hasn’t had a chance to benchmark the new CPU yet, but you can find a handful of hands-on pictures at his site. You can also find official press shots at NetbookNews.de.

The Eee PC 1005P isn’t expected to ship elsewhere until January at the earliest. And odds are it wasn’t supposed to be available in Germany yet either, so if you can’t wait to get your hands on one, you might want to hit up Notebooks.de sooner rather than later… or wait until later.

Update: It turns out Notebook.de isn’t actually selling the netbooks yet. They’re just showcasing them in their shop. Johannes snapped some hands-on photos at the store. It still seems to me like these weren’t supposed to be visible yet though.