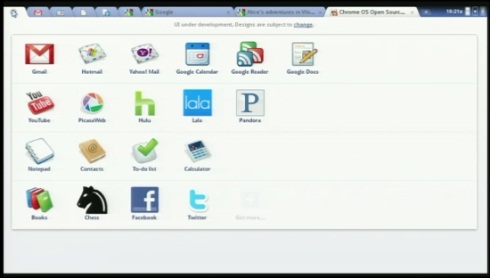 Acer is apparently aiming to be one of the first companies to launch a netbook with the Google Chrome operating system. DigiTimes reports that the company plans to release a netbook running Google’s netbook-focused OS in the second half of 2010. While early pre-release builds of the Chrome operating system are already available for download, Google expects the OS to be ready for general use next year, which would make Acer’s planned netbook one of the first to use Google Chrome.

Acer was also one of the first major companies to introduce a netbook running Google’s Android operating system, which was initially designed for smartphones. Unlike Android, Google Chrome is primarily a web-focused operating system. Instead of running local applications from a hard drive, Chrome OS will run web apps such as Gmail, Google Docs, or Zoho Office.

While Acer’s Google Android netbook is actually a dual boot computer that can also run Windows, Google is positioning Chrome as a full-fledged that can stand on its own. The company has suggested that PC makers will launch machines with Chrome as the only operating system, but I wouldn’t be surprised if Acer or other manufacturers try to hedge their bets by loading both Chrome OS and Windows onto upcoming netbooks. A fast-booting, web-only operating system certainly sounds like a good alternative to existing solutions such as Splashtop or HyperSpace.