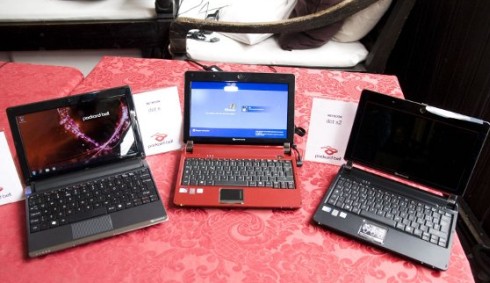 Notebook Italia has scored a little face time with some new Packard Bell models, including the 10.1″ dot S2 [translate link] and the 11.6″ Butterfly XS [translate link].

The Dot S2 (in black and red on the right-hand side of the image above) will feature an Intel Atom N450 processor, 1GB of DDR2 memory, a 160GB SATA hard drive, and the usual wireless and wired connectivity options. It looks as though the 10.1″ S2 will also ship with Windows XP Home. Prices are not confirmed, but should be in the range of 250-300€.

As for the XS, it will feature Intel’s beefier SU4100 processor, 2GB of DDR2 memory, a 250GB SATA hard drive, a 6-cell battery, and Windows 7 Home Premium. Expect a second model as well – possibly featuring the Core2 Solo SU3500 and an upgraded 320GB hard drive.

Both the XS and Dot S2 look like they’ll ship with multi-touch capable touchpads.