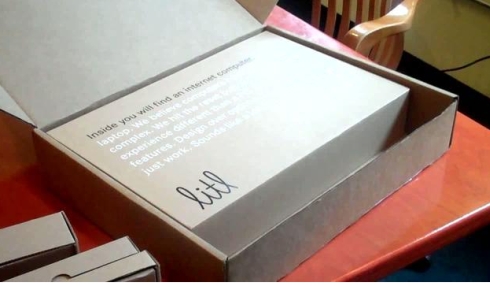 Sure, I’ve poked fun at the Litl Easel “webbook” which looks like little more than an oversized, overpriced, underfeatured netbook. But the company does seem to understand the blogosphere. A few days ago they sat down with CrunchGear to provide an extensive look at the software running on the computer. And now, rather than waiting for some enthusiastic customer or tech reviewer to get their hands on the Litl Easel and post an unboxing video, Litl has uploaded its own short movie showing the computer’s retail packaging.

There’s nothing too surprising. You get an AC adapter, the computer, an optional remote and/or HDMI cable. The box with the laptop has a sort of manifesto describing the “internet computer” that rests inside. The funny thing is it specifically states that the machine is “not a laptop.” Fast forward a few seconds in the video and you’ll hear the Litl employee refer to it as… a laptop.

In place of a user manual, the machine ships with 14 cartoony cards describing how the Litl Easel works and how it’s different from other computers.

You can check out the video after the break. Litl also put together another video talking about the history of the webbook, complete with a couple of early prototypes including a transluscent prototype that made it easier to see what was going on inside.  I’ve embedded that ivdeo after the break as well.

One reply on “Litl Easel unboxed… by Litl”