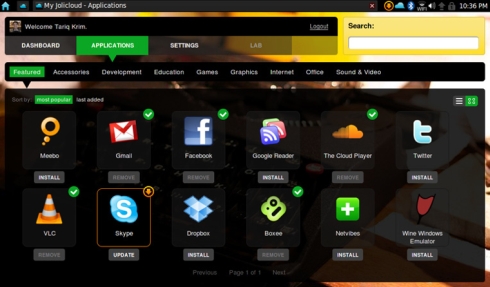 So many Intel Atom powered netbooks have been released over the past year and a half that it’s easy to forget that not all Atom chips are created equal. There are the Intel Atom N270/N280 chips that have found their way into the vast majority of netbooks. They’re pretty speedy for a low power chip and they tend to be paired with Intel GMA 950 graphics. That graphics chipset is actually pretty common outside of netbooks, and so there’s pretty wide support for it.

And then there’s the Intel Atom Z520/Z530 series processors with GMA 500 graphics. These chips tend to be a bit more sluggish, although the graphics processors do feature hardware acceleration for some 720p HD video. Unfortunately, this pairing is a heck of a lot less common, and the chipset isn’t as widely supported. For instance, there are now dozens of Linux-based operating systems that will install smoothly on a netbook with an Atom N270 CPU and GMA 950 graphics. There aren’t very many that will with with an Atom Z520/GMA 500 chipset.

But the folks at Jolicloud are hoping to move from that first category into the second. Jolicloud is a Linux-based operating system designed for netbooks. The software makes it easy to run web apps as if they were desktop applications, which makes it easy to move back and forth between your desktop or larger laptop and your netbook. There are also a number of social elements to Jolicloud, such as seeing what applications your friends are using.

Up until now, Jolicloud was only available or netbooks with GMA 950 graphics. But founder Tarik Krim sent out a message on Twitter this afternoon announcing that Jolicloud is internally testing support for machines with GMA 500 graphics. That includes the Dell Inspiron Mini 10, Acer Aspire One AO751, Asus Eee PC T91, Eee PC 1101HA, Eee PC 1201HA, and maybe even the Sony Vaio P (although I’m not sure how Jolicloud’s user interface would look on a 1600 x 768 pixel display).

Krim says Jolicloud will be looking for volunteers to help test the OS on that hardware within the next few weeks.