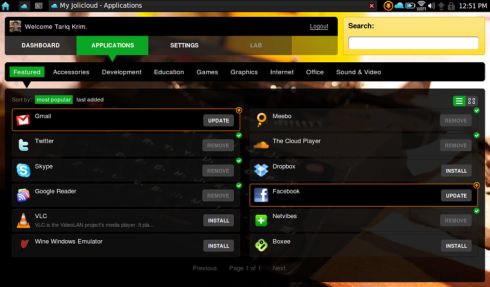 As I mentioned the other day, the folks behind the netbook-friendly Jolicloud operating system are in the process of adding support for machines with Intel Atom Z5xx processors and integrated GMA 500 graphics. For the most part, systems with GMA 500 graphics don’t perform as well as laptops with the more common GMA 950 graphics chipset. But GMA 500 does have a few tricks up its sleeve. It can handle hardware decoding of some HD video, for instance. And the Atom Z5xx/GMA 500 combo uses less power, which helps prolong battery life.

Most important, there are a few mini-laptops that use the chipset, and right now it’s pretty tough to find a Linux-based operating system that will support them out of the box. This includes the Asus Eee PC T91MT, Eee PC 1101HA, Eee PC 1201HA, Acer Aspire One 751, Dell Inspiron Mini 10, and Sony Vaio P, among others.

I’ve often described Jolicloud in the past as an operating system that’s designed to blur the lines between the desktop and the cloud. And it does do that. But that’s not the only thing that makes this operating system netbook-friendly. It’s the fact that the developers are actively working to ensure that the Linux-based OS works on all possible netbooks. Lead developer Adam McDaniel (of Array.org kernel fame) wrote a brief article yesterday explaining how the team has been going about adding support for netbooks with GMA 500 graphics.

Basically, when Canonical and Dell partnered to install Ubuntu Linux on the Dell Inspiron Mini 10 and Inspiron Mini 12 in late 2008, the companies worked together to enable support for the GMA 500 graphics found in those laptops. But it wasn’t implemented directly into the kernel, so while you can theoretically enabled GMA 500 support for other notebooks in Ubuntu, it doesn’t work out of the box. You need to do a fair bit of tinkering to get things working. Some Linux distributions such as Mandriva went a bit further and developed packages that would allow netbooks with GMA 500 graphics to work properly without any user intervention.

But McDaniel says that Jolicloud has tweaked its kernel to support GMA 500 graphics at native resolutions out of the box. The OS is still in private testing, but next pre-release version of Jolicloud that will go out to testers will include supports for netbooks using this platform. So if you’ve already signed up for an invitation, but have been waiting for GMA 500 support before installing the OS, the wait is almost over.