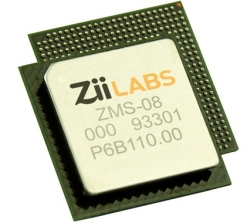 Creative’s upcoming Zii EGG is a handheld device that looks like an iPod Touch, runs Google Android, and will have a ZMS-05 processor that supports OpenGL ES, and 1080p video output. While the Zii EGG hasn’t really hit the streets yet (some developer kits are already available, but that’s it), Creative is launching it’s next-generation Zii chip: The ZMS-08.

The chip is supported by ZiiLABS’ version of Google Android and the company’s Plaszma operating system.

Creative is offering samples of the chip to some partners right now, and it’s expected to begin shipping early next year. It’s not clear how long it will take before we’ll start to see netbooks or other devices based on the platform appear in the marketplace.