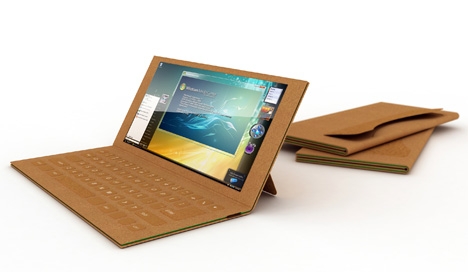 OK, this thing ain’t real. Nobody’s manufacturing one, and it’s not at all clear that it would be a good idea to do so. But designer Je Sung Park has put together a mockup of a rather intriguing concept: a laptop made partly from recycled paper products, making parts easy to replace.

Of course, cramming all the electronic components into the paper/cardboard case and making sure the keyboard and touchpad (I don’t see a touchpad, so maybe the idea is to use a touchscreen?) are responsive is likely to be a bit of a challenge.

While disposable cameras and cellphones already exist, Park’s idea isn’t necessarily that you would buy this cheap laptop and throw the whole thing out after you were done sending an email. Rather, parts could easily be discarded and replaced. And since the case would be made from recycled pulp and paper, you could recycle a significant portion of the computer if and when its time has come.

5 replies on “Concept: Disposable laptop made from recycled paper”