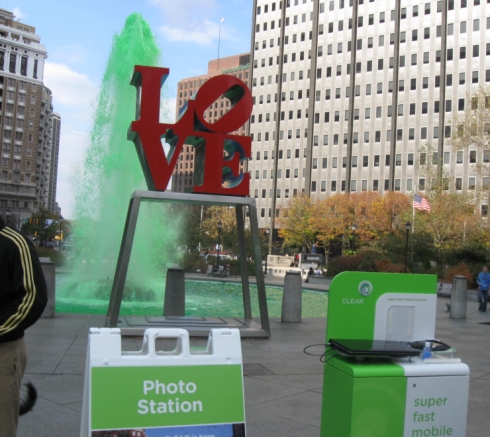 CLEAR launched its citywide WiMAX network in Philadelphia a few weeks ago, but the company held an event today in the iconic LOVE Park to kick things off. I stopped by to check things out, and you know what? Citywide internet access doesn’t make for a whole lot of exciting visuals. You know, cause wireless broadband is kind of invisible until you plug it into your computer. And you can only look at so many setups of computers plugged into modems and USB dongles.

That said, the folks at CLEAR did make things interesting by hosting a balloon drop ceremony. There were about 200 balloons and each had a code for a prize. I got $8 in music downloads. Somebody is supposed to have gotten a laptop.

If you’re not familiar with WiMAX or CLEAR, here’s the deal: It’s sort of like a citywide WiFi network. You can either get a modem for your home which you can plug directly into a computer or into a wireless router to host a home network. Or you can get a USB dongle that will work from your home or on the go, but only with one computer at a time.

CLEAR promises download speeds averaging between 3 and 6Mbps with bursts of up to 10 Mbps, and download speeds of about 1Mbps. That makes it generally slower than many cable modem services, but similar to or faster than many DSL plans. And it’s a lot cheaper, with plans starting at $25/month for home use and $35/month for mobile use — with no data caps.

That’s a heck of a lot cheaper than mobile broadband modem plans available from 3G cellular networks. The down side is that CLEAR isn’t available in nearly as many parts of the country yet. It’s available in about 2 dozen cities in 9 states right now.

There are some launch specials now including an online deal where you can get a home and mobile plan for $50/month lifetime plan. CLEAR also offers voice service, so you could sign up for home internet and voice. There’s also an internet special right now allowing users to signup for home, mobile, and voice service for $70/month for life.

One feature I especially like is that you can sign up for month to month plans. You have to pay a $17.50 activation fee if you go month to month, while it’s waived if you sign up for a 2 year plan. But that’s a lot better than the signup and cancellation fees you have to deal with from most other broadband and mobile broadband internet service providers.

You can check out more photos from the CLEAR launch event in Philadelphia after the break.