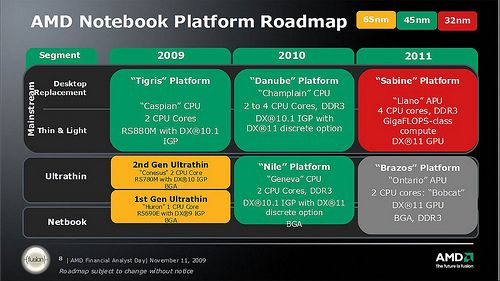 While that’s great if you’re putting together a gaming rig or a home theater PC, it means that AMD hasn’t offered much for the low cost netbook and thin and light notebook space, pretty much ceding the territory to Intel (and to a lesser degree VIA and ARM). But with the growing popularity of 11 and 12 inch laptops with Intel CULV processors, it’s becoming clear that a fair number of people are looking for something in between a low power netbook and a souped up desktop replacement. And AMD is taking notice.

The company has outlined its next generation set of chips aimed at thin and light computers. The new chips will be part of AMD’s third-generation Nile platform and they’ll begin rolling out in 2010 and 2011. AMD says the new chips could power ultraportables that will get 7 or more hours of battery life.

The Nile platform should be ready in the first half of 2010. AMD is also preparing new Bobcat chips for “ultrathin” notebooks and netbooks for 2011. This is the first time I can recall that AMD has use the term “netbook” to describe any of its products, so the announcement represents a bit of a change for the company. Bobcat is part of the Brazos line which is described as a “low cost, low-power ultraportable platform… which will contain the ‘Bobcat’ core and integrated GPU.”

You can check out a slidehow of AMD’s presentation after the break.

Update: EE Times has the most succinct description of the new Bobcat chips I’ve seen yet. Bobcat will consume less than 2W of power, and the chips will be capable of running at less than 1W. They may offer slightly less performance than today’s Atom chips, which basically means that this isn’t a case of AMD deciding that netbooks were becoming powerful enough to justify the company building a chip. Rather, AMD decided to try producing a chip that could compete with Intel’s Atom processor head to head which kind of says to me that AMD execs realized the netbook space is too big to keep ignoring. thanks BoloMKXXVIII!