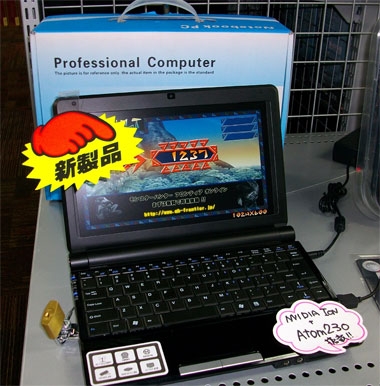 We’re starting to see laptops ship with NVIDIA ION graphics. But while big name PC makers like HP and Toshiba have jumped on the ION bandwagon, they’re only using the chipset in laptops with 11.6 inch and larger displays. You won’t find a 10 inch or smaller netbook in the US with an Intel Atom processor and NVIDIA graphics anytime soon. It’s note entirely clear why that is, but at least one colleague has put forth the theory that PC vendors want to differentiate their higher end products.

Anyway, apparently Weibu didn’t get the memo. A few months ago the company introduced the Weibu N10A, a 10.1 inch mini-laptop utilizing NVIDIA’s ION chipset. Now the laptop is available for purchase in Japan for 49,800 Yen, or about $556 US. While that might sound a bit pricey, netbook tend to cost more in Japan. Netbooked points out that the Weibu N10A is going for just about $20 more than the Asus Eee PC 1005HA in Japan.

The N10A has a single core Intel Atom 230 processor, which is the type typically found in low power desktop, or nettop, computers, not netbooks. The computer also has 2Gb of RAM, a 150GB hard drive, HDMI output, and a 10.1 inch, 1024 x 600 pixel display.