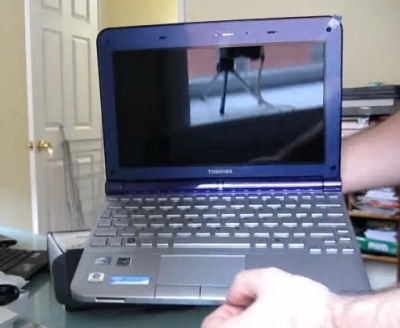 Toshiba announced an update to its netbook line this week. The new Toshiba NB205-N330 looks a lot like the Toshiba NB205-N310 we’ve come to grow and love over the last few months. It has the same excellent keyboard, wide touchpad, and high capacity battery. But there are a few things that make the new model different. First and foremost, it ships with Windows 7 Starter Edition instead of Windows XP.

The NB205-N330 also has a higher capacity, 250GB hard drive, and Toshiba still says it gets up to 9 hours of battery life.

The Toshiba NB205-N330 will be available to the public starting on October 22nd when Windows 7 is released. But the folks at toshiba were kind enough to send me a demo unit a few days early and I’ve posted an unboxing video below.

On the one hand, I’m a bit disappointed that Toshiba went with Windows 7 Starter which lacks the Aero Glass interface, doesn’t support changing desktop backgrounds, doesn’t have Windows Media Center, and lacks a few other features found in the higher end versions of the operating system. On the other hand, going with Windows 7 Starter helps Toshiba keep the price down. This netbook starts at about $399.99.

Update: I didn’t even notice this until I read about it on Electronista, but Toshiba has promised not to load “craplets” (or free trial software) on any of its Windows 7 notebooks including the NB205-330 netbook. In other words, when you first launch the system, you’re greeted by a clean desktop with precisely one icon on it: the recycle bin. On the other hand, you do get the Google Toolbar for Internet Explorer, Norton Internet Security, and a shortcut to purchase Quicken products. So in this case, the crap-free promise may only be desktop deep.