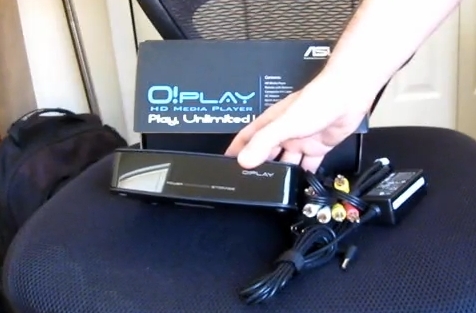 The Asus O!Play HDP-R1 Media Player is a device that turns your standard television into a media center. Here’s how it works. You plug this $99 box into your TV using the HDMI or composite A/V cables. Then you plug in a flash drive, hard drive, or other device using the USB or eSATA ports.The media player will detect any audio, video, or photos you have on the storage media and allow you to navigate through your files with an included remote control and a television set.

What I’m really excited about is the fact that the O!Play HDP-R1 also includes an Ethernet port, which means you should be able to access media stored on a shared network drive or network attached storage device.

Asus sent me an O!Play media player to test out and I’m planning to set it up so that I can stream TV programs recorded on the Home Theater PC in our living room to a television in another room in the house. In the meantime, you can check out my unboxing video after the break. I’m pretty impressed with the HDP-R1’s relatively small size and intuitive looking remote control. The recorder should be able to handle a huge array of media codecs including MPEG1/2/4, H.264, DivX, and XViD, but I’ll let you know more about that once I’ve had a chance to put it through the paces.