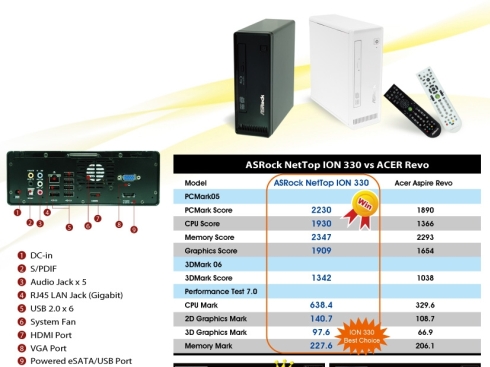 ASRock has been putting out tiny, low power nettops with NVIDIA ION graphics for about as long as anyone… which is to say for a few months. Now the company is introducing an updated model called the ASRock ION 330HT-BD. Like the first model, the new computer can handle HD and Blu-Ray video while using very little power thanks to the NVIDIA ION platform. But the ION 330HT-BD has a few new features including a media center remote control, WiFi, DTS audio, and an eSATA port.

There are also two new less powerful versions including the ION 330HT and ION 330Pro. The former lacks the Blu-Ray drive, but includes a Super Multi Drive. The ION 330Pro has a DVD drive but lacks WiFi and the media center remote. No word on pricing yet.