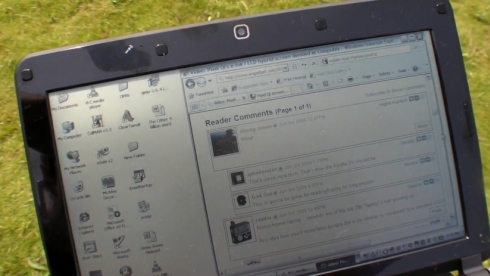 It looks like the wait for Pixel Qi’s low power, dual mode screens could be over soon. Speaking at a recent event, company founder Mary Lou Jepsen (who helped design the OLPC XO Laptop display) said that the first Pixel Qi screens could ship to an tablet maker ahead of schedule, as early as November. As she clarified on the company’s blog, that does not mean that we’ll be able to walk into a store and buy a product using the screen next month. It could be a while before the OEMs building products with the display actually bring those products to market.

Pixel Qi’s displays can function either as high quality LCD screens with full color saturation, or in a sort of high contrast eBook mode. In high contrast mode the displays use very little power, and since they’re reflective, the displays can be read outdoors using ambient light instead of a backlight. Even in this mode, you get some color, although it’s not as vivid as when the screen is used in emissive mode.

Anyway, while there’s no word on exactly when we’ll see a tablet, netbook, or other device using a Pixel Qi display hit the streets, it looks like we’re a few steps closer than we were last month.