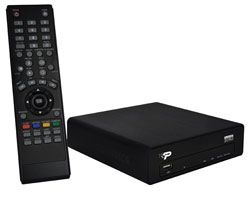 Patriot is a company better known for producing RAM and flash cards than media streaming devices. but the company’s new Patriot Box Office is an HD media player that you can plug into an HDTV (or standard def set) to watch videos, listen to music or view images on your TV. You know, just like the Asus O!Play HD Media Player.

, and I noticed something funny when I was looking at the images: The user interface looks virtually identical to the O!Play UI. It’s likely that both boxes are actually using the same Linux-based software, although it’s not clear to me whether it was developed in-house by Asus or if both companies are licensing it from another party.

That said, the Patriot Box Office does have a few features that help justify the price, which is $30 higher than the asking price for the O!Play. First, while both devices can play media from USB hard drives or flash drives or from a shared network drive using an Ethernet connection, the Patriot Box Office also features an internal 2.5″ hard drive bay. The drive isn’t included, but you can slap a hard drive in there to store all the media you want.

There’s also an optional USB WiFi adapter and while the O!Play ships with composite AV cables, the Patriot Box Office ships with a set of composite cables plus an HDMI cable. 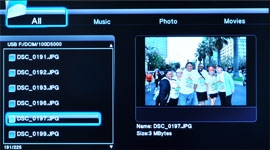