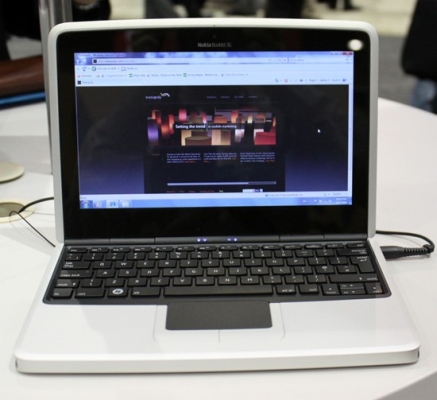 The Nokia Booklet 3G is one of the most hotly anticipated netbooks of the year. And now that we know you’ll be able to pick one up for under $400 (with a service contract, in Germany at least), I’m less reluctant to call it a netbook than I was when we thought it would cost as much as $800. Now that the Booklet 3G is due out in just a few weeks, Nokia is letting journalists spend some time with the little laptop, and the folks from Laptop Magazine and PC Magazine have both published hands-on impressions.

Both publications found the keyboard to be a bit on the small side. But PC Magazine described the Booklet 3G as feeling “more like a Macbook Air than anything else” thanks to its solid build quality and light weight. The folks at Laptop Magazine, who have probably spent a bit more time scrutinizing netbooks felt differently, deeming the Booklet 3G to be a bit heavier than you would expect given its slim size. But at 2.6 pounds, this small laptop with a 57WHr battery and 1280 x 720 pixel display still stands out from the crowd.