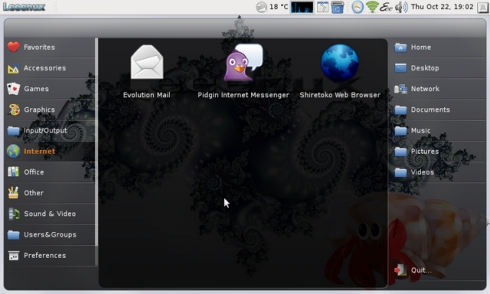 If there’s one thing the world probably doesn’t need right now, it’s yet another custom Linux distribution for netbooks based on Ubuntu. But that’s exactly what we’ve got with Leeenux. And yet there are still a few reasons you might want to give it a try, especially if you have an older netbook like an Asus Eee PC 701 with a 7 inch display and 8GB or less of disk space.

For one thing, once installed, Leeenux only takes up about 1.4GB of disk space. That means you can install it on a netbook with as little as 2GB of storage. The user interface is based on Ubuntu Netbook Remix, which is designed to play well with smaller, 7 inch displays. Leeenux also uses eee-control, a power management tool for Eee PC netbooks which can help prolong battery life.

The operating system comes with a number of Linux apps preloaded including the Evolution email client, Firefox 3.5, AbiWord for word processing, the Gnumeric spreadsheet app, and Totem Movie Player. You can always install other applications including OpenOffice.org if you want a fuller feature office suite. But OpenOffice takes up a heck of a lot more disk space than AbiWord and Gnumeric.