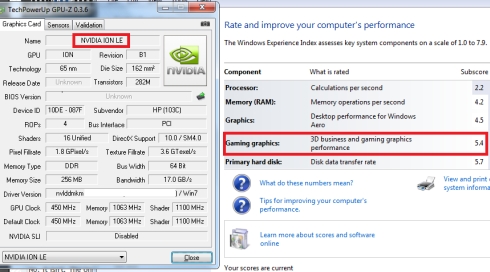 The NVIDIA ION platform combines a low power Intel Atom processor with high performance NVIDIA GeForce 9400M graphics to enable low power computers to handle HD video, some modern video games, and other tasks that can take advantage of the graphics processor. But there are two versions of the ION platform: ION and ION LE. The only real difference that I’m aware of is that NVDIA ION supports DirectX 10 while ION LE does not.

For the most part, machines that have been shipping with Windows XP have come with ION LE, which makes sense since Windows XP doesn’t support DirectX 10 anyway. But if you want to upgrade to Windows Vista or 7, you might want to enable DirectX 10… and it turns out it’s not as hard you might think to do that.

The end result? His Windows Experience Index score for gaming graphics jumped from 3.9 to 5.4. He’s also noticed a performance boost when playing games that use DirectX 9, although he had to manually tell some games to use DX9 instead of DX10 because they were slower under DX10.

Oh, and in case you don’t want to fidget with the drivers yourself, runawayprisoner says he’ll be uploading the modified driver soon, so stay tuned to the forum thread for more details.