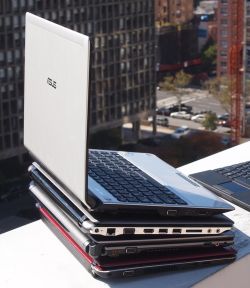 While it’s a bit early to say whether Intel’s CULV platform is the new Atom, (there are still plenty of 10 inch netbooks with Intel Atom processors out there), there’s no doubt that the Consumer Ultra Low Voltage platform is making a splash — with PC makers at least. Acer, Asus, HP, Dell, Lenovo, Toshiba, and other companies are all putting out thin and light laptops powered by CULV processors.

Gizmodo’s Joanna Stern looked at four of the 13 inch CULV laptops that are available today: The Acer Aspire Timeline AS3810T, Asus UL30A, HP Pavilion DM3, and Toshiba T135. While these laptops are all a little large for my taste, most of these companies also produce similar models with 11 to 12 inch displays (including the Acer Aspire Timeline 1810T, Asus UL20A, and Toshiba T115).

In the end, there can be only one winner, and Stern settled on the Asus UL30A. She credits its stellar battery life, excellent keyboard, and above average touchpad with working multitouch features.

I’ve been testing the UL30A for the last few days, and I have to agree on most counts. The keyboard is comfortable to type on, and while I don’t love the texture of the dimpled touchpad, it is large and relatively easy to use and two-finger scrolling is a breeze. I’m not a fan of the single large button below the touchpad, but Asus is hardly the only PC maker to use the one-button-with-rocker approach. And as for battery life… the UL30A is hard to beat. Joanna managed to squeeze out nearly 6.5 hours of battery life — while playing video with WiFi on. I’ve used the computer several times for 6 or more hours at a stretch only to have the battery meter hit 30 to 40%.

I’m looking forward to testing some of the other CULV laptops to hit the market, but the Asus UL30A does definitely have a lot going for it. Unfortunately it also has a relatively high price tag of nearly $800. The 12 inch Asus UL20A is cheaper, at just $581 from Amazon, but it also has a lower capacity battery that Asus states is only good for up to 7.5 hours of run time.