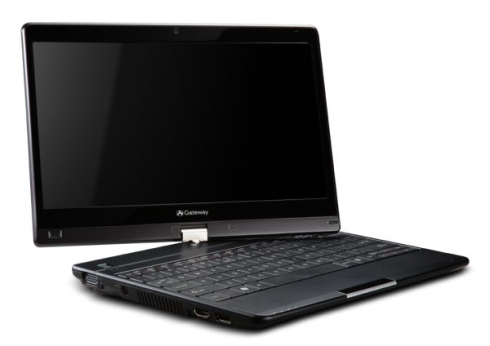 Tablet PCs that can be used either in tablet or touchscreen mode are nothing new. Years ago Microsoft founder Bill Gates proclaimed that touchscreens would forever change the way we interact with computers. That hasn’t really happened yet, but the success of the iPhone with its multitouch, finger-friendly interface has really changed the way we think about touch input. Whether that’s the reason we’re seeing so much interest in touch-only devices like the rumored Apple Tablet, Microsoft Courier, CrunchPad and other devices remains to be seen. But I’m a fan of keyboards for text input, which is why I really like the Gigabyte TouchNote T1028X which is a netbook-sized device that features a full fledged keyboard as well as a touchscreen and swivel for use in tablet mode.

The Gateway EC18T is an upcoming 11.6 inch laptop/tablet with a similar form factor. But it’s more powerful than the TouchNote, sporting an Intel Core 2 Duo processor, GS45 graphics chipset, and up to 4GN of RAM. It will be available with Windows 7 Home Premium or Basic, and while it’s not exactly a netbook, I wouldn’t be surprised to see the EC18T come in at a reasonably price. There’s no word on the final pricing yet though.

Oh, and in related news, I was on public radio tech program Future Tense yesterday talking about the prospects for touchscreen tablets.