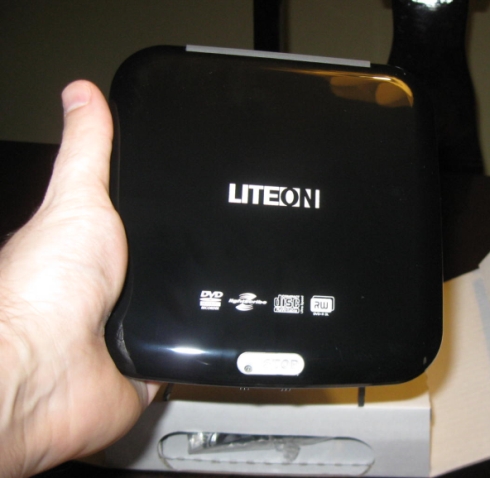 The Lite-On eTAU208 DVD/CD Writer is a portable disc drive that’s pretty handy for folks who like to travel light. Not only is the DVD burner barely any wider than an optical disc, it also weighs just 0.77 pounds. And it draws power from you’re computer’s USB port, which means there’s no extra power cable to lug around.

The folks at Lite-On sent me a demo unit to review, and so far it seems to perform exactly as described. One thing I really like is that the disc burner comes with a short USB cable that can be tucked into a slot on the bottom of the disc drive for easy storage. It took a little bit of effort to cram the USB cable into place, but it sure beats misplacing the cable or having yet another separate item to throw in your bag.

When you plug the disc drive into a PC, it should be recognized almost immediately. If you want to shut down the drive while it’s still plugged in, just hit the Stop button and it will power down. You can power it up again by opening and closing the lid.

I was also pleased to note that when I plugged the disc drive with an HP Mini 5101 and powered up the netbook I was able to hit F9 and choose the eTAU208 from the boot options menu, which means that you don’t need to wait for your operating system to load before your PC will recognize the drive.

On the down side, the disc drive has a cheap plastic feel to it, but that’s probably because it is made of cheap plastic. But that’s also one of the reasons it’s so light weight.

. You can check out some unboxing photos after the break.