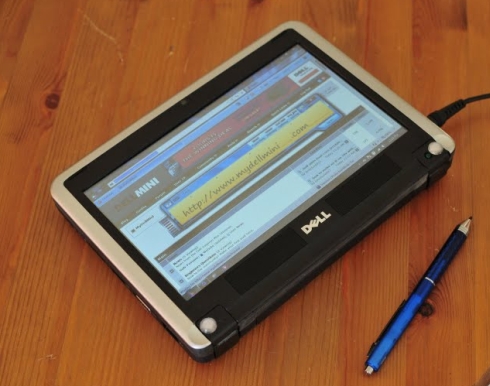 The Dell Inspiron Mini 9 may have been (mostly) discontinued, but the 8.9 inch netbook is still popular with hackers and folks that want to install OS X on a netbook. I was never a big fan of the keyboard on the Mini 9. For one thing it lacks Fn keys. But you know when that’s not a problem? When you rip off the keyboard and convert the netbook into a touchscreen tablet, like MyDellMini forum member Rob928 did.

Technically, he started with a Dell Vostro A90, which is the business version of the mini 9. But it’s basically the same computer. He used a FidoHub touchscreen kit to give the computer a touch display, then essentially modified the frame so that the screen sits right on top of the PC base which lets you hold it in one hand and use the computer as a tablet instead of a laptop.

If you still need a keyboard after completing a similar hack, all you have to do is plug in a USB keyboard, since the tablet is still a fully functional Dell Mini 9 with USB ports, optional Bluetooth, WiFI, and all those other goodies.

As you can see in some of the photos in the MyDellMini forum, the tablet isn’t actually any smaller than the original netbook. It just doesn’t have a usable keyboard. But it’s much easier to hold in one hand for web surfing from the couch, train, or wherever it is you surf the web from.