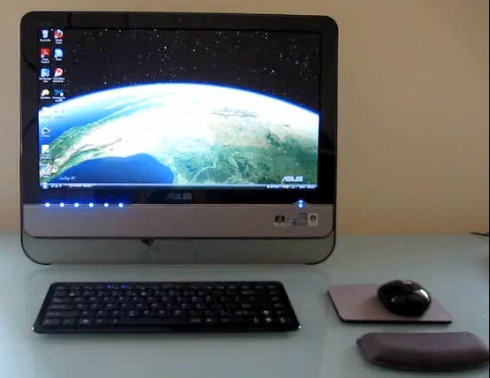 The Asus Eee Top ET2002 is a 20 inch all-in-one desktop computer with NVIDIA ION graphics. It’s not exactly a netbook or a nettop. It’s way too large. But it’s a direct descendant of those devices thanks to the low power processor and relatively low price tag. It sells for under $600 (You can pick one up for $581 from Amazon

While the computer doesn’t have a Blu-Ray drive, it can handle 1080p video thanks to the NVIDIA ION graphics processor and that includes decoding Blu-Ray discs if you happen to have a USB Blu-Ray drive and software designed to take advantage of the GPU.

Asus sent me a demo unit to try out over the next few days, and I’ve posted an unboxing video after the break, along with a first look at the included software. Overall performance seems to be decent, but not spectacular. The video performance, on the other hand, certainly outpaces what I’ve come to expect from a typical netbook.

This model doesn’t have a touchscreen, but if you’re a fan of touch interfaces, Asus does have another model, the ET2002T with a touchscreen display.

Keep in mind, while the NVIDIA ION graphics will let you play local 1080p video content, you won’t be able to watch HD Flash video content from the web until Adobe releases Flash Player 10.1 next year. That’s the version that will add support for NVIDIA GPU acceleration for HD video.