The Asus Eee Keyboard is a computer-in-a-keyboard that’s designed to be used as a multimedia device in conjunction with an HDTV. The keyboard has a 1.6GHs Intel Atom N270 procesor, 16GB to 32GB of SSD storage, and 1GB of RAM and runs Windows. It also has a 5 inch, 800 x 480 pixel touchscreen display. But the idea isn’t to use that tiny display for your computing tasks. Instead you hook the Eee Keyboard up to an HDTV or monitor using the VGA or wireless HDMI connections to stream media from the keyboard, the web, or a shared network drive.

Asus first announced the Eee Keyboard at CES in January, and we’ve been waiting for it ever since. But this week the FCC published a series of documents related to the Eee Keyboard including a user manual and a bunch of photos. One thing I learned is that the Eee Keyboard can stream HD video thanks to a Broadcom AV-VD904 video decoder.

The Eee Keyboard has 802.11b/g/n WiFi, Bluetooth 2.1, and a battery that the user manual says should be good for up to 4 hours. Right now, the manual says it will ship with Windows XP Home, but I wouldn’t be surprised if it comes with Windows 7 (or Windows 8) by the time it actually hits the streets. 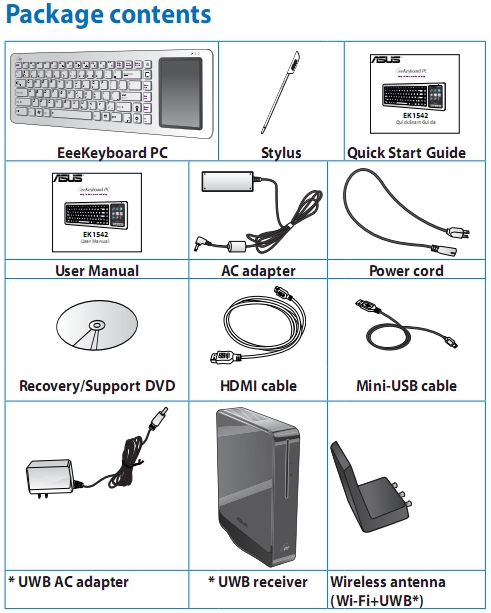 2 replies on “Asus Eee Keyboard stops by the FCC”