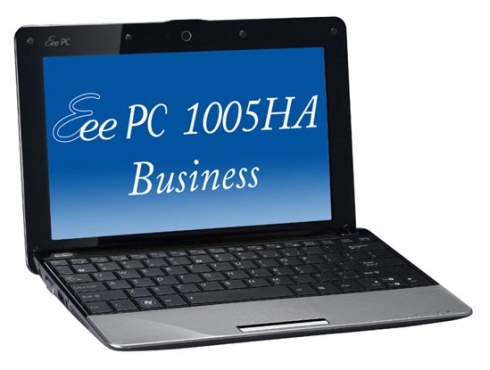 Microsoft has been offering low cost Windows XP Home Edition licenses to PC makers selling netbooks for nearly two years. In order to qualify, a netbook needed to have a small screen, slow processor, and no more than 1GB of RAM or 160GB of hard drive space. As a result, nearly every netbook released over the past two years met those specifications. But here’s the thing: If you’re not interested in keeping the price down, the sky is the limit, because those restrictions don’t apply to laptops with Windows Vista, or even Windows XP Professional.

Now that Windows 7 is just around the corner, Asus Japan has apparently decided to give the Eee PC 1005HA a business-class upgrade: by sticking with Windows XP, but loading the computer up with Windows XP Professional.

The Eee PC 1005HA Business edition is virtually identical to the versions currently on the market. But the new model has a silver and black chassis instead of a solid black one, and 2GB of RAM. The rest of the specs are prety much what you’d expect, including a 10.1 inch, 1024 x 600 pixel display. 160GB hard drive, and 10 hour battery. The Eee PC 1005HA Business edition is due out today in Japan for about $715.

Keep in mind, Asus is launching updated versions of its Eee PC 1005HA, 1008HA, and 1101HA laptops with Windows 7 in the US, Europe, and other parts of the globe later this week.