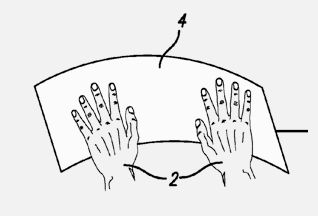 Microsoft, Apple, TechCrunch, Archos, and a fair number of other companies are throwing some weight behind the tablet concept. And I’ve been pretty skeptical for one major reason: text input. The idea of a handheld device without a physical keyboard for surfing the web, reading eBooks, and watching video seems like a good idea, until it comes time to write an email, leave a blog comment, or even enter a URL. You can do those things with handwriting recognition or on-screen keyboards, but it’s typically not a very comfortable or efficient experience on a tablet style devices with a 7 inch or larger display.

So every time a new rumor about the CrunchPad, Apple Tablet, or Microsoft Courier emerges, I kind of yawn and say to myself, “yeah, like that’ll take off.”

But now I’m starting to think that the Apple Tablet might actually have a shot, if it uses new technology revealed in a recent patent filing. AppleInsider found information detailing a touchscreen that would allow for a combination of “typing, resting, pointing, scrolling, 3D manipulation, and handwriting.” It would detect all ten fingers placed on a touchsreen. And it would be able to recognize and ignore input from your palms.

In other words, you could have a fully functional on-screen keyboard that you can use with 10 fingers much the way you would use a physical keyboard.

My first thought is that it would be hard to type on a screen without the tactile feedback you get from an actual keyboard. But that’s what people said about the iPhone’s on-screen thumb keyboard. And iPhones are selling like hotcakes. Actually, it’s probably hotter. When was the last time you ordered a hotcake?

The patent spells out a number of different ways to interact with the device, including tapping to simulate a mouse click, or using multitouch gestures to manipulate objects on the screen. The display could be adjusted to work with different hand sizes, and users wouldn’t need a mouse or keyboard since everything would be built into the screen.
Of course, it’s possible that these features won’t be built into the upcoming Apple Tablet, but are instead intended for a new input device for Apple computers. But it sounds to me like Apple is trying to do for text entry on tablet style devices what it did for text input on smartphones by reinventing the way we interact with touchscreen displays.

And that could just make the Apple Tablet take off in a way that previous touchscreen tablets haven’t.

On the other hand, I’m still skeptical about the idea of typing on a virtual keyboard covering a display resting on a tablet. Sitting in an office chair and looking at a monitor while typing a way on a keyboard is ergonomically challenging enough. I shudder to think about the back and neck pain associated with hunching over a tablet sitting on the desk trying to type a document while looking at the on-screen display at the same time.

12 replies on “Apple Tablet could have an on-screen, multitouch keyboard”