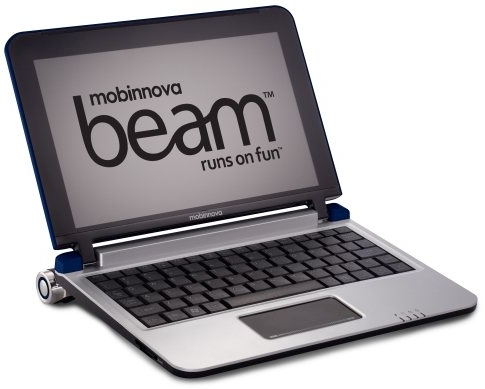 NVIDIA has been showing off a mini-laptop with an 8.9 inch display called the Mobinnova élan since this summer. The Mobinnova computer is one of the first laptops to use NVIDIA’s Tegra platform, which bundles an ARM-based processor with high performance graphics. The net result is a mini-laptop with excellent battery life that can run for 5 to 10 hours while playing HD video or up to 24 hours when playing audio.

But up until now there’s been no word on a price or launch date. Now Laptop Magazine is reporting that the little laptop has a new name and something resembling US launch details. The computer will be renamed the Mobinnova Beam in the US. As expected it, will run Windows CE, which is a low power OS that can run on ARM processors (unlike Windows 7).

The Mobinnova Beam will support 720p video playback. And once Adobe Flash Player 10.1 is released, it will be able to handle HD video streams from the web since the software update will add support for NVIDIA GPU acceleration.

Laptop Magazine reports that the Mobinnova Beam will be available at a subsidized price in the US when bundled with a 3G data plan from a wireless broadband provider. There’s still no final word on the pricing, release date, or who that wireless carrier will be, but Mobinnova is expected to have a few announcements at CES in January.

You can find more images of the Beam at Laptop Magazine.