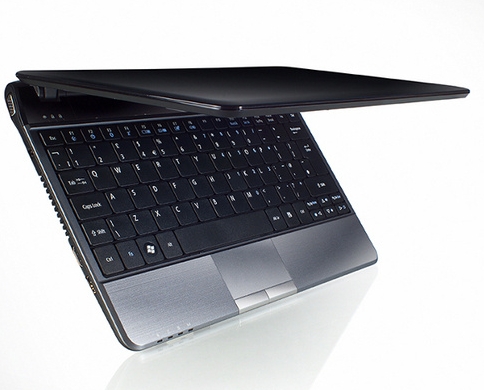 I was pretty impressed with the Acer Aspire 1410 (also known as the 1810T in many parts of the globe) when I had a chance to review it. The 1.4GHz Intel Core 2 Solo SU3500 processor and GMA 4500MHD graphics were a nice step up from the Atom/GMA 950 combo you get with most netbooks. But at 11.6 inches and 3.1 pounds, the Acer Aspire 1410 isn’t much bigger or heavier than a typical netbook. But that Core 2 Solo processor wasn’t a miracle worker. The machine still struggled with some CPU-intensive tasks, like playing HD Flash video.

But now Acer is introducing an upgraded model called the Aspire Timeline AS1810TZ that should be able to handle more CPU heavy tasks thanks to a dual core 1.3GHz Intel Core to Duo SU7300 ULV processor.

The SU7300 is still a ULV, or ultra low voltage processor, which means it won’t really compete with the chips you’ll find in high end machines. But this processor has two advantages: It helps Acer keep the size and price down, and provides decent battery life. Acer is claiming that the laptop will be able to run for up to 8 hours using a 6 cell battery. I’ll believe that when I see it. I was lucky to get 5 hours out of the Aspire One 1410 with a single core CPU. Update: I forgot, the Acer Aspire 1410 has a lower capacity battery than the Acer Aspire 1810t. It’s one of the only differences between the two models. Hopefully Acer will release the AS1810TZ in the US with its high capacity battery instead of releasing a different model in the US this time.