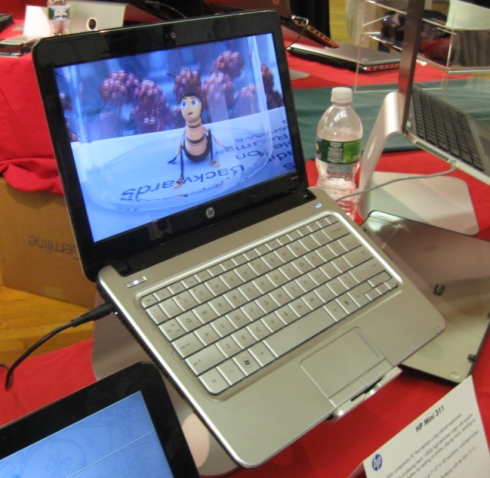 I got my first look at the HP Mini 311 last night, and it’s a slick looking mini-laptop. Under the hood the laptop has a 1.6GHz Intel Atom N270 processor, NVIDIA ION graphics, 1GB of RAM, and a 160GB hard drive. But it’s the NVIDIA graphics that really make this 11.6 inch laptop shine. It can display 1080p video on the high resolution 1366 x 768 piel display or an external screen using the HDMI output.

The folks at the NVIDIA booth were showing off the laptop’s capabilities by upscaling a standard DVD to play on an HD display, while the folks at the HP booth were playing back Bee Movie on a demo unit. Both looked great.

One thing I’ve noticed is that the keyboard on the HP Mini 311 is almost identical to the one on the HP Mini 110 series of netbooks. In other words, even though the Mini 311 has a large enough chassis for a full sized keyboard, it has a 92% full sized keyboard. HP says that’s because the keyboard used on the company’s netbooks has received such positive feedback that the company didn’t want to change it.

You can check out some more photos of the HP Mini 311 in action, as well as a shot of the laptop side by side with an HP Mini 110 with a smaller 10 inch display, after the break.