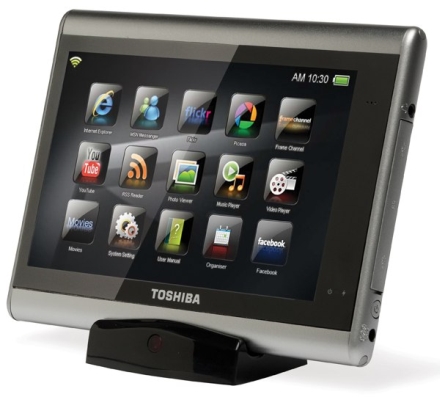 Sure, it’s not the first touchscreen tablet to market. But based on the photos and the relatively affordable price (249 Euros or about $356 US), this thing looks like it could be a winner.

The JournE features a 7 inch touchscreen display and uses an ARM-based processor. It also packs 802.11b/g WiFi The operating system is based on Windows CE 6.0 Pro, but it looks like there’s a custom user interface and some custom software including an RSS reader and support for YouTube and local video formats including WMV, DivX, and H.264. The default web browser is the mobile version of Internet Explorer, but I wouldn’t be surprised if you could install Fennec on this little guy when the mobile version of Firefox is ready for release later this year.

Update: Engadget reports that the tablet can support 1080p video and has an HDMI output and measures 14mm or about 0.55 inches thick. That sounds pretty thin until you realize it’s just as thick as the Sony Vaio X, which is a clamshell-style laptop. The JournE Touch Tablet will have 1GB of onboard storage and an SD card slot for storing additional media. It should hit the streets before the end of the year.

Despite the size and multimedia prowess (it can output sub-1080p video over an HDMI plug in the dock), the device measures a mere 14mm thick and weighs just under a pound. There’s only 1GB of built-in storage, but that can be expanded via the SD slot, and the device can access external storage over USB. Word is it’ll retail for 250 Euro in Q4 this year.

Update 2: And SlashGear reports that the tablet has an 800 x 480 pixel touchscreen display and can either show scaled 1080p video on that display or pump it out in full resolution to an external display via the HDMI port.

Update 3: Sascha from Netbook News has one of the first hands-on videos. You can check it out after the break. I have to say, this thing looks pretty slick. Sascha says the battery should be good for up to 14 hours of web surfing, or 3 to 4 hours of video playback.