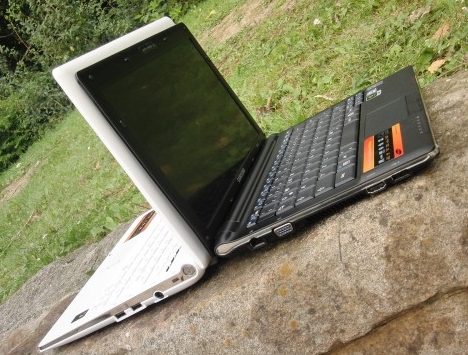 We’re seeing a growing number of companies push out laptops with netbook-like specs and prices but larger screens. But what’s the optimal screen size for an ultraportable? Some folks say netbooks should have 9 inch screens, while others prefer 10. If you go up a size grade, the battle seems to be between 11.6 inch and 12 inch displays. The Samsung NC20, Dell Inspiron Mini 12, and Lenovo IdeaPad S12 all have 12.1 inch screens, while the Samsung N510, Acer Aspire One 751, Acer Aspire 1410, and Dell Inspiron 11z all have 11.6 inch displays.

So what’s the difference? Not much, really, but the folks at Cyberbloc.de managed to get their hands on a Samsung NC20 and N510 to do a little comparison. These two laptops feature remarkably similar designs, but the N510 has a slightly smaller display. As you can see from the image, the overall case is a bit smaller as well, although the keyboard appears to be virtually the same size.

On the inside, these two laptops are even more different. The N510 has an Intel Atom processor and NVIDIA ION graphics, while the NC20 has a VIA Nano CPU and VIA graphics. But superficially most of the differences appear to be in size. You can find about 20 more pictures at CyberBloc.