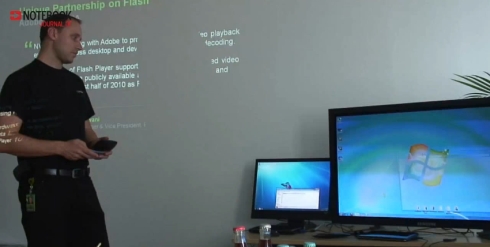 Netbooks with Intel Atom processors generally have enough power to handle 720p video playback. And if they have 1024 x 600 pixel or lower resolution screens, they can handle standard definition and some high quality Flash video playback in full screen mode. But there are two things that no netbook I’ve used to date have been able to accomplish:

That’s true even for machines with NVIDIA ION graphics. Because Adobe Flash doesn’t currently take advantage of the GPU. Instead it relies on the CPU, and the Intel Atom processor just isn’t up to these tasks. In fact, I had trouble getting even the Acer Aspire 1410 with a 1.4GHz Intel Core 2 Solo SU3500 processor and GMA 4500MHD graphics to handle standard definition video from Hulu in full screen mode.

But it looks like a breakthrough is just around the corner. Earlier this year Adobe announced it was working with companies including NVIDIA and Broadcom to support hardware acceleration for Flash video. And now Notebook Journal in Germany has posted a video showing a machine with NVIDIA ION graphics playing HD Flash video smoothly on a high resolution monitor.

It looks like the video was taken at a recent presentation, and I have a feeling Notebook Journal wasn’t supposed to post the video online so soon, so you might want to check it out before it’s gone. If I’m reading the presentation in the background properly, NVIDIA and Flash are promising to make the technology publicly available during the first half of 2010.

You can check out the video after the break. Update: As expected, the video has been temporarily removed.